​My History
I have been working as a freelance web designer and IT trainer for 15 years, and now I also cover teach in secondary and FE and occasionally primary.

Starting my MA in photography I now plan to look deeper into photography with a view to gain enough knowledge and technical experience to be able to teach photography in FE in the future, as well as be a practicing photographer  in documentary and portraiture.
​
March 2017 - This is a Journal/Evaluation for my MA Photography -
Collaboration module AD7904 project Feb 2017 - May 2017
8th February 2017 - How it all started
Dora posted an advert on the Glos Uni for a  film maker/video artist/photographer to join a collaborative project... which I applied for here is a copy of the advert explaining what she wanted..

I am a student on the Fine Art MA course; primarily a painter.  I am developing a collaborative project along with a contemporary music composer, Liz Johnson. We are looking for a film maker/video artist/photographer to join our collaborative project – to respond/translate/contribute to the activities.

There may be several physical outcomes - artworks, sound art, film, music, with the main research questions around:
– how do we work?
– how does collaborating have an impact on our working methods?
This collaboration is an exploration, the outcome has not been fixed, it will unfold as we work together.
What would a video artist see in this collaboration, what might captivate their camera?
Hopefully this project could develop further, toward a multimedia exhibition of the work to a public audience.  More can be discussed beforehand and agreed prior to commencing.

The filming and the work will be happening in my studio in Malvern, Worcestershire.
If you are interested or want more details please email me: or have a word when you are in for AD7904 on Wednesday.

Thank you .  Dora Williams
Response
I responded to this advert as it looked interesting and I love working with Art and artists and have previously worked in galleries in Cheltenham and had my own Gallery/ Shop in 2008. I was keen to try filming so I felt this was a perfect opportunity for me. I started filming Dora and Liz working together a few days later. Dora is so accommodating and friendly inviting myself and my camera crew (usually one to two helpers) into her house for us to film her and Liz work together. Welcoming us with tea and home made cake making us feel part of this special collaboration.  I find her to be a professional and talented artist and business woman. I feel lucky that they let me be a part of the collaboration and let me film and photograph them working and talking about their working process openly and honestly.
​Georgia Charles BA

Journal - & MA Evaluation May 2017 AD7904
For the first chapter of this film it had been decided by Liz and Dora that Dora would begin her painting and Liz would watch and be inspired to write a short piece of music. For the first session she watched and listened to Dora paint, recording the sounds she makes with her brushes and canvas, as I recorded Dora working and studied liz watching and composing, using a friend to do cut away shots and myself doing pure straight shots - with plans to combine the two in editing. During this time Liz wrote notes in her book to inspire her when composing her music. Liz then went upstairs in Dora's house to use her piano and continue to composer her piece of music on a piano. Liz worked for about 30 minutes on her composition stopping regularly to write her notes down and repeating small parts of the written ideas she had when seeing and listening to Dora paint.

​Although she didn't write a complete piece of music she had a good start on it today, and will be working on it at home to create a short piece to go with Dora's fine Art and documentary on the day of the exhibition , which we hope to be in June this year. ​Feb 2017

Working with Dora and Liz, documenting their work together I have gained experience working collaboratively with artists. Initially I chose to help with the collaboration as it sounded interesting and a great opportunity to work with other artists for a collaborative module on my MA theory. I feel  competent with the filming and lighting, as it is more what I'm used to as a photographer, but I  have hired an editor to help speed up the editing process, as I am a novice with Premier Pro. This is a great learning curve for me, filming is the next step on the camera ladder for me and I have really enjoyed capturing this art expression on film. March 2017.
Contact Me 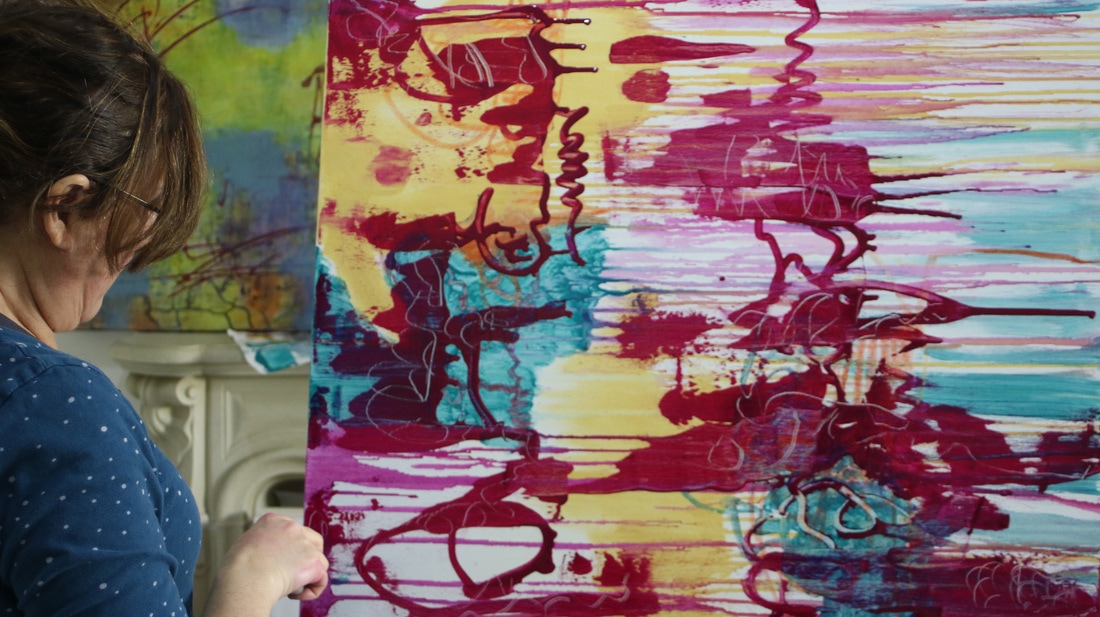 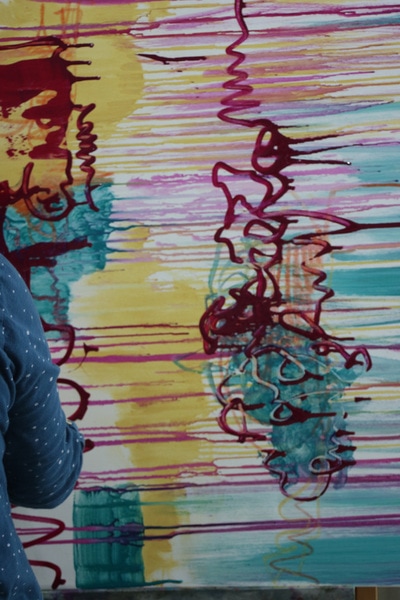 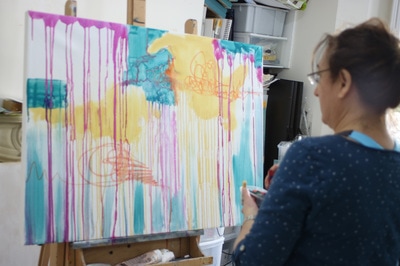 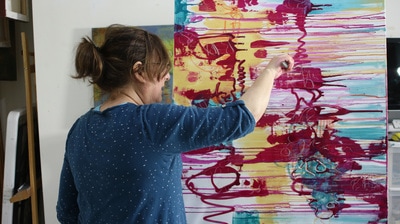 In total I filmed Dora and liz 4 times with at least two cameras full lighting and sound to the best of my ability making over 10 hours of footage for this project. learning as i went along mainly from mistakes and advise from peers. I also arranged for us all to be filmed for in interview after the 3 chapters as to how we felt about the collaboration. This was new to me and I did my best but I still prefer to be behind the camera. Finally filmed Liz at her concert  'A Requiem for Aleppo' in a church in Malvern with a friend of mine, we were able to do straight and cut away shots as a team and place two zoom recorders in there to get the sound we wanted and I mainly wanted from this. I had done this mainly to get some final sound but decided to film also whilst we were there as we both needed practice to gain knowledge and we were able to use some of the sound. But after filming and sound collection in this very last minuet, Guerrilla filmed piece we were asked by Liz and another of her posse if they could use/ or we might make a film using the footage to create a small film to advertise the work they were doing in raising awareness and much needed funds for the Aleppo Refugees. This just shows how if you put yourself out their for free in the first instance you can easily get a name for yourself and begin other projects through recommendations and other collaborations spinning off from these small self funded projects.

So from this collaboration I personally have made a couple of new friends and business acquaintances Dora and Liz, I have gained some great experience as a film maker. Having a creative project to work on gave me confidence that as an artist I would be able to input my knowledge and skills to work with others in a professional way and has given me loads of confidence and inspiration to carry on with the filming - and I already have two  people/artists who are keen for me to try out my skills on them for a portrait film to advertise them as artists.   Working in film with sound and movement had opened my eyes to the possibilities of using it in the future hopefully for paid work. I feel this experience has given me a chance to try out new skills confidence to work with new people and learn that to collaborate in some form is an essential part of being an artist.

I feel I was lucky to work with two very professional and interesting people and have been able to see threw their eyes as to how they create their Art and now how as a team we will exhibit it.

EXHIBITIONS
I have finished the film for this project but may continue to add to it for the exhibition. We have booked the Hardwick Gallery for 14th to the 21st July. We have arranged a meeting with Sarah Bowden as well as Matt Frederick the Uni technician to outline the configuration of the space as well as go through risk assessment. At this exhibition we will have Dora's Artwork on display, Liz will have her music playing via a stereo system and I will show my short portrait collaboration film. We plan to invite our friends family and peers to the exhibition and may have some walk though's. We have another exhibition and workshop day planned also, the Elmslie gallery in Malvern has been booked from 29th September (opening night) and we have secured a space for the projection of my film at both venues as well as an area I can display some still photography. The exhibition ends 0n the 6th of October and will be part of the Malvern art festival. Liz has arranged another exhibition and workshop for October this one is music related,  some initial outlines for the workshops have been made which we will all be a part of.

AUDIENCE
I feel the audience for my work might be 'Artists' as the film is about artists working together. But I also hope it will be of interest to the general public as it gives in insight to what happens in an artist studio and something not seen very much a composer at work. As I have only shown it to my friends and peers so far but we will endeavor to get feedback from the exhibitions, by asking the audience for their views on the show in a visitors book. To interact with the show I will promote my self as a photographer and film maker as will Dora promote herself as an artist and liz as a composer. I will make my blog accessible  to the public to gain commissions and promote myself on social media over the summer months using this film, my photography and a few others short films to promote myself.

FUTURE
Having this opportunity with the collaboration on my MA photography course has given me insight into a field of portrait film making and awakened in interest in documentary film and photography. Using the work I have created I feel I can now take my career forward with confidence in my ability to be professional and work with others to create a good piece of Art work whether it be photography or film projects in my.
​Georgia Charles - May 2017
Copywrite Cheltenham Web Design 2017 All rights reserved. Images by permission of Dora Williams Music by permission from Liz Johnson
1st edit - March 17 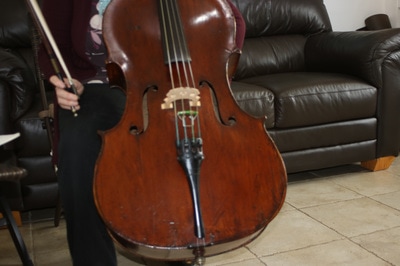 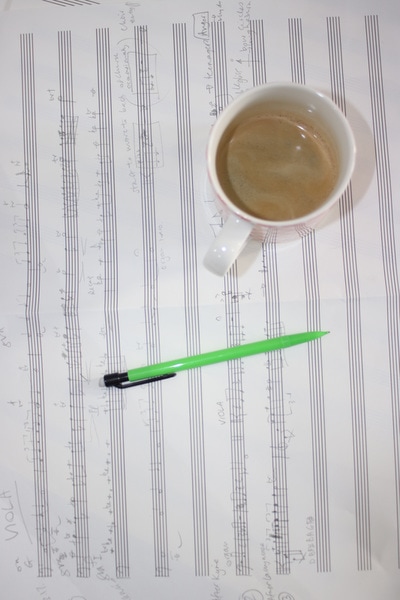 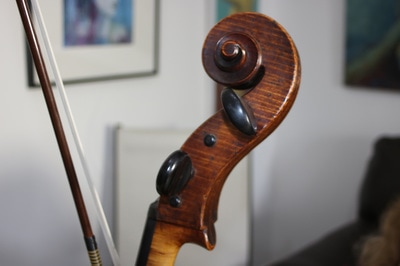 All photography taken by Georgia Charles 2017